However, 3D models printed with a resin 3D printer do not have the distinctly visible layers that are usually present in objects printed with the filament used by FMD printers. Resin 3D printers create objects with smooth finishes and can accommodate highly intricate details in designs.

What is a resin 3d printer?

Resin 3D printers make use of a resin to produce 3D models or objects. The resin is a photopolymer that is held in a resin tank. When the photosensitive resin is exposed to light, it is activated (or cured) and becomes solid. 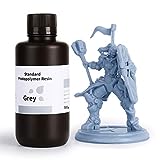 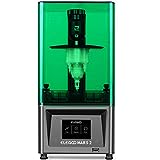 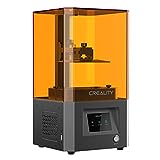 How does a resin 3D printer work?

Digital Light Processing (DLP) resin 3D printers cures the resin by using a light projector. The light is projected in a specific shape to print the object one entire layer at a time. The light is essentially projected in the shape required to print each specific layer. The shape of the light is manipulated by using a complex system of mirrors to reflect the exact shape needed for each layer.

Liquid Crystal Display (LCD) resin 3D printing is also sometimes called Masked SLA or MSLA. In this type of resin 3D printing, an array (or group) of LED lights shine through an LCD screen into the resin tank. The LCD works as a stencil or a mask that only allows a specific shape of light through. Similar to DLP, the object then gets printed one layer at a time. The shape of the light that shines through the LCD screen changes as the 3D printing progresses to accommodate changes in the shape of the object being printed.

The use of LCD screens has made this type of resin 3D printer more affordable and widely available. Many LCD 3D printers are available for under $1,000.

3D printing is sometimes also referred to as additive manufacturing. It is the process of taking data created by specialized software, providing it to hardware (the 3D printer), and creating specific objects one layer at a time.

The first step to printing a 3D model is the design. Designs can be created on Computer-Aided Design (CAD) software or by making use of 3D scan data. The information is then exported in a 3D printable file format (like STL or OBJ). This is then inserted into the resin 3D printer. 3D resin printers have software that analyzes the data and creates print settings to create the 3D object one layer at a time. These printing instructions are then sent to the 3D printer.

Resin-based 3D printers can print objects from various 3D printer resin materials. 3D printing resin materials are different from the filament used by a filament printer. Standard resin is the most budget-friendly option. It is smooth and translucent while printing objects with a high level of detail. Mammoth resin can be used to print larger (mammoth) pieces. Transparent resin is ideal for smaller pieces that need to have a smooth surface and are transparent. Engineering resins produce objects that are strong while lightweight.

Once the print instructions have been checked and confirmed, the resin 3D printer will begin the printing process. The printer can be left unattended until the print is completed. In some cases, the printer will need to be manually refilled with resin. In contrast, others make use of a cartridge system that does this automatically.

If you plan on 3D printing large amounts of objects, you could invest in a resin washer or resin cleaner. These machines cut down the manual cleaning that you will need to do after removing each object from the resin tank. Remember that your resin 3D printer’s platform will also need to be cleaned.

Some 3D models printed with a resin 3D printer could still be slightly soft and malleable. The object will need to undergo a post-curing process to obtain its highest possible strength and stability. This is done by exposing the object to either heat or light. In most cases, UV light is used. Most resin 3D printer manufacturers also produce dedicated UV curing chambers, which can be used for post-curing. You could also use a UV nail lamp (for smaller objects) or build your own UV curing chamber.

The final thing to do is remove any supports from the object. These areas will then need to be sanded down to give the object a clean finish.

The Benefits and Limitations of Resin 3D Printers

3D printing with resin allows you to build small objects with a lot of fine and complex details. A variety of materials can be used, including colored or transparent resin, ceramic, and metal. The objects printed with resin 3D printers have smooth finishes – unlike the visible layers produced by the filament used by FDM 3D printers (Fused Deposition Modelling printers).

However, objects printed with resin 3D printers require post-processing. Both the model and the printer (including the resin tank) need to be cleaned after the printing is complete. Resin printing requires specific safety precautions when handling the material to avoid inhaling toxic fumes that the 3D printing process could produce.

Resin 3D printers let you print objects from resin. They are ideal for objects that have intricate details. The finished product requires some processing after it is printed to remove uncured resin and remove any supports, but in the end, you will have a 3D model that is detailed with a highly smooth finish.