Should you get a camera for your kid?

Getting a camera for your kid can be a great way to get them interested in the world. Kids are super creative, and photography can be a good outlet. For adventurous kids who don’t want to sit inside all day, giving them a camera can keep them busy for hours. Looking at the world through a lens changes your perspective. Giving a kid a camera is a good way to get them to not only look at the world but to capture and remember it.

What are good cameras to get for kids? 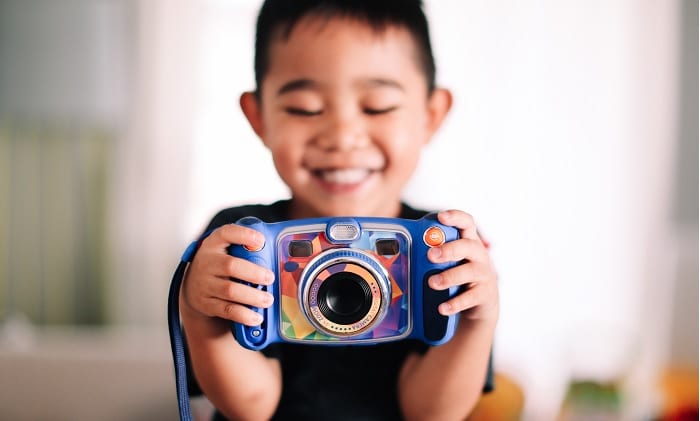 There are lots of great options out there for kid-friendly cameras. You’ll want to take your kid’s age and interests into account, as each camera has its niche. Polaroid cameras are good for older kids as they are more delicate and hard to take with you everywhere. Many people get polaroids for the aesthetic of the printed polaroid that a younger kid wouldn’t care about. You might want to get a waterproof camera for kids who spend lots of time in the water. If you live near a lake or ocean or go to the pool often, you might want to make sure your kid’s camera is waterproof so they can take pictures underwater. Younger kids can have more fun with an underwater camera because they are more durable than a polaroid. A disposable camera is another good option for kids because they are super durable and easy to take everywhere.

While you will have to wait to get the photos developed, this might be a better option for older kids who understand that they won’t get their pictures immediately. Another option is to get a small digital kids camera. When they take their pictures, they can see them immediately on the LCD screen, and with a memory card, they can take tons of pictures and save them digitally. They also have an adjustable lens; for kids who seem to be really into photography, a digital camera is a nice option because they can play with the zoom lens and edit their pictures digitally.

The biggest brand known for its instant polaroid cameras is Fujifilm. Their Instax mini is an incredibly popular instant camera today. The idea of a polaroid camera is that its instant film is self-developing, so rather than send in your roll of film or develop it yourself, the camera prints out a developed polaroid of your picture a few seconds later. Polaroid cameras are probably better for older kids because they are more delicate. The film is sensitive, and a little kid messing with the camera could accidentally open it up, exposing the film to light and wasting it. Most people who have polaroid cameras have them for the aesthetic, and a younger kid wouldn’t appreciate it.

Many teenagers and young adults are buying polaroid cameras to capture memories in a fun and artsy way. The Fujifilm Instax mini polaroid cameras come with a built-in flash and have a viewfinder so you can see what you’re taking a photo of. One downside to polaroids is that they have a fixed focus lens, so you can’t adjust the shutter or aperture yourself. Another downside is you can’t record video. This isn’t a problem for most people, but if you want to be using just a camera and not a phone, it can be annoying.

Disposable cameras are similar to polaroids since they can only take photos and they also use film. They also have a fixed focus lens, so you cannot adjust the focus. However, they are not self-developing, so for every roll of film, you have to either develop it yourself or pay to have it developed if you don’t have the equipment. A disposable camera is a very durable camera, thanks to its simple design, so it’s a good option for younger kids (as long as they have the patience to wait for their pictures to be developed). Fujifilm makes disposable cameras as well as the Instax mini, and they are a well-credited company. Kodak also makes good disposables.

Disposable cameras have been around for decades and were the first cameras that were accessible to everyone. Cameras used to be expensive and fragile. Even if you could afford one, you couldn’t take it everywhere. They had big lens attachments, and they were heavy and delicate. It was inconvenient to travel with a camera, and you were likely to break it. Once disposable cameras were invented, non-photographers could take pictures wherever. Disposable cameras made photography portable and easy for anyone.

A waterproof camera is an excellent option for kids because, let’s be honest, it’s one less way they can break it. In the summer, kids are going to be swimming. If they like to take pictures, it only follows that they would want to take pictures and videos while swimming. Waterproof kids cameras are a great idea for summer vacation since your kids will be getting wet, but you don’t want them to stop capturing those memories.

An underwater camera is such a cool concept to a kid. We can all remember how fascinating it was the first time we wore goggles underwater; how awesome it is to capture that image and look back on it. Underwater photography is so fun and can produce some cool images. The Olympus Tough is a nice underwater camera; it is kind of expensive but good quality.

Everyone has heard of the GoPro. It truly is the best action camera. It is famous for being so versatile but still giving high-quality HD video and pictures. They use micro SD cards to hold your pictures and videos that can later be downloaded to a computer or smartphone or viewed on the camera’s LCD screen. GoPros have all kinds of mounts, so you can attach them to your helmet, wrist, bicycle, and whatever else you want to capture your experiences in 4k video and download to a memory card. Most versions of the GoPro camera have a waterproof case that you can put on it to go underwater.

GoPros are usually pretty sturdy, so your kids can have fun with them. They can be kind of pricey, but they are perfect for action-packed vacations; and while small, they can handle a lot. People take them on biking trips, scuba diving, boating, ziplining, and many other activities that other cameras might break or get lost in. Kids love GoPros because of how versatile they are.

Digital cameras are probably the most popular for kids. They are easy to use, and you can find decent kid’s cameras for a reasonable price. Most digital cameras, whether mirrorless or DSLR, have a rechargeable battery and an LCD screen. They use a memory card to store photos and videos digitally. Digital cameras have many options and lots of different features, but most have a zoom lens so you can adjust the size and focus of the image manually. Most come with a USB cable to connect to devices and a wrist strap, so you don’t lose it. Some more expensive cameras can also have a touch screen. Having an optical zoom lens can be fun for kids because they have more control over the picture. The simple ability to focus and zoom through the lens can drastically change the picture quality.

There are lots of kid-friendly digital cameras out there. The VTech KidiZoom duo is a good option for younger kids. The KidiZoom duo is one step above a toy camera: it captures pictures and videos, can record audio, and even has visual filters and stickers. The KidiZoom camera also has games and other fun features, as well as parental control settings. The VTech KidiZoom camera has built-in storage but can also hold a micro SD card to store more photos and videos.

Getting a camera for your kid can be a step in the right direction, creatively speaking. It will push them to see the world differently and to be more involved. There are hundreds of different camera options, all with different prices and abilities. Consider your child’s interests and tendencies before buying, and you won’t regret it.