What is a disposable camera? 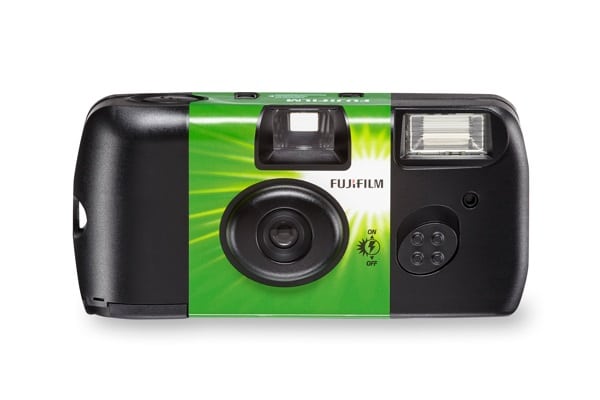 A disposable camera, also known as a single-use camera, is a small, compact camera meant to be used for only one roll of film. Initially, these cameras could take about 8-10 pictures before filling up. Today, disposable cameras usually have around 25 spots on a film roll and almost always have a built-in flash for all lighting conditions.

The first “disposable” camera was created in 1949 by H.M. Stiles, who worked for a company called Photo-Pac. Essentially Stiles had figured out how to enclose a small roll of film of 8 exposures in a cardboard box that only cost $1.29. In 1966 FEX, a French company, released their version, which had 12 exposures. Fujifilm developed their first model of a disposable camera in 1986 using 35mm film. As competition rose, companies produced better and more advanced disposable cameras, morphing into what we have today.

Disposable cameras really popularized film photography in the ’80s as they made it much easier for average people to take photos. Instead of carrying around a big, fragile, expensive camera with rolls and rolls of film, people could buy cheap, portable cameras. Granted, a disposable camera won't give you the same amazing quality you get from a digital camera, but when you're just looking to make memories in the moment, having quick access to a small portable camera is worth sacrificing some of the picture quality. In fact, today, lots of people choose to lose that quality. Smartphones have made taking pictures unbelievably easy. You can take high-quality photos easily and fast, and it’s always in your pocket!

Still, today lots of people opt out of the smartphone cameras and are buying disposable ones. The retro/vintage feel is becoming increasingly popular, and disposable cameras are an easy way to bring that vibe to your photos.

Most disposable cameras come with a built-in flash and roll of film to use. Some cameras are useless once you use the film they came with, but some have replaceable film rolls so you can reuse the camera.

A really popular company today is Fujifilm. They are really popular for their Fujifilm Instax polaroid cameras, but they also sell disposable cameras. They have two models of disposable cameras. The first is the QuickSnap Superia. The QuickSnap Superia uses the Superia X-TRA800 film and has 27 exposures for every 35mm film cartridge. The 32mm lens is fixed focus on f/10 with a shutter speed of 1/140 sec, and the camera has a built-in electronic flash for low-light situations with a flash range of about 4 meters. It is equipped with an inverted Galilean-type plastic lens finder, which means the image is smaller. It is very small, only 115 x 54 x 34 mm and 90 grams (about 0.2 pounds).

The viewfinder gives you a clear guide to what your picture will look like. The sliding flash allows you to switch from flash to no flash pictures quickly. It also has a large exposure counter on the screen, so you know how many pictures you have left. Once the counter reaches 0, you can take out your film cartridge. Removing the film cartridge is easy; you just use a screwdriver to pry off the cartridge cover and pull out the cartridge.

Their second camera is the QuickSnap Marine. The Marine also uses Superia X-TRA800 film and has 27 exposures and a sliding flash as well. It has the same lens as the Superia, a 32mm lens with a fixed focus on f/10, and the shutter speed is 1/125 sec.

The QuickSnap Marine also uses an inverted Galilean-type plastic lens finder. It is a little bit bigger and heavier to accommodate the fact that it is waterproof up to 10 meters. It measures 73 x 133 x 42 mm and 170 grams, or about 0.4 pounds, so about twice as heavy as the Superia, but still not very heavy. The waterproof disposable camera allows you to take great pictures underwater. The other features and processing steps are the same as the Superia. The QuickSnap Marine is about $13.95 on Amazon for one camera and $59.99 for a pack of four. At Walmart, one is just $11.95.

Kodak is another company that makes cameras. Their film cameras are reusable, but they don’t come with a pre-loaded film cartridge like the Fujifilm QuickSnap. They have two options of cameras as well. The Kodak M35 takes 35mm film with 135 film (24x36mm) format. Like the QuickSnaps, it has a fixed-focus lens and a flash switch. It also has manual film winding. It has a 31 mm lens with f=10, and a shutter speed of 1/120 sec. It requires 1 AAA-Alkaline battery, which is not included with the camera. It measures 114 x 63 x 35 mm and 100 grams (0.2 pounds).

The M35’s cousin, the Kodak M38, is another good option. It has similar features to the M35 but is slightly heavier to give more stability, and it has a stronger flash.

The Kodaks tend to be more pricey, at around $100 on Amazon.

Kodak also has a line of film called Kodak GOLD 200. It’s a 35mm, color negative film with 24 exposures per cartridge. The color film takes really good quality photos by printing negatives of each shot onto the film. Those negatives are then processed and developed onto sensitive paper, producing a positive color print of your image.

Take it to school:

A lot of schools nowadays don’t allow phones in the classroom. However, some students get around that rule by bringing disposable cameras to school and taking pictures throughout the day with them. It’s a fun, easy way to have memories of school that you otherwise wouldn’t have pictures of.

Bring it on vacation:

Tons of people use disposable cameras for vacation photos. It makes it so much more fun to have a dedicated device and makes the photos more vintage and interesting. In addition, using a disposable camera gives you a more authentic feeling to your photos because you get a real, physical print of it, rather than seeing it on your phone screen. And because you are paying for it to be developed, you will want every picture to count, so they will have more meaning.

Weddings and other parties:

A very common feature of parties and especially weddings, where memory-making is crucial, is a disposable camera table. Guests are encouraged to take the cameras and take photos of the event. This gives a lot of coverage and memories that could otherwise be lost. By using disposable cameras, all the photos can be collected into one scrapbook, which makes a great wedding gift. It is a much better option than everyone having their separate photos on their separate phones. By using disposables, the bride and groom and share those memories of their special day.

Some photographers are using these disposables to view the world through other people's eyes. For example, they leave a disposable camera in a public place, like a train station or mall, with a note for whoever wants to take a few pictures and pass the camera on. In another way, friends and family living in different places can mail the camera to each other, take a few pictures in each destination, and develop it together to see where everybody's been.

This is especially useful during vacations when kids want to take pictures, but you don't want them to have a phone and don't trust them with a more expensive digital camera. Getting a cheap disposable lets kids take their own vacation pictures that they can develop and keep. Letting them have their own camera lets them explore their own interests and creativity without worrying about losing or breaking an expensive camera.

Disposable cameras can be a lot of fun and allow for a lot of creative growth. They provide a fun way to build tangible memories of special moments. They have been around for decades and are still popular. Nothing can top their ease and aesthetic, all in one tiny package that you can take anywhere.